How to Get to the Front Page of Reddit

Reddit is the seventh most visited website in the US, and besides reaching a massive audience of over 330 million monthly active users, is one of the best ways to promote your business or cause. Because of its user driven upvote system it’s possible for websites or businesses to drive millions of visitors to their website using Reddit.

When you post to Reddit your post is displayed to a few dozen to a few hundred users depending on the subreddit and its activity level, who then vote on your content. The first few votes on your post determine whether it will be shown to more users as it gradually rises, or falls through the subreddit and the site as a whole.

Posts are ranked by a combination of how recently they were posted and the number of upvotes and downvotes they’ve received. To reach the top of the subreddit, and the millions of Redditors browsing /r/All, your post needs to get upvotes early on and maintain a high ratio of upvotes to downvotes.

Once a post has reached the top of its subreddit, it will start being shown to Redditors outside of the subreddit. This can help posts reach Reddit’s massive audience of hundreds of millions of monthly visitors, but generally takes significantly more upvotes than simply reaching the front page of a given subreddit.

How many upvotes does it take to go viral on Reddit?

No matter how good your content is there is a high likelihood that your post will be ignored without any upvotes and insignificant engagement. Because the first few upvotes on your post are so important, there are a few key points that are important to keep in mind and take advantage of when you post your content to maximize your exposure and get to the front page of Reddit.

The most important part of your post’s success, bar none, is having high quality content that is relevant to the users you’re trying to reach.

Reddit’s voting system does a very good job of filtering out spammy and low quality content, so for the purposes of this article we will assume that you have good, well written or designed content that will impress your readers when they visit it.

What can make or break a post, even one with very good relevant content is posting it in the wrong subreddit (Reddit community focused on a particular topic).

When your post is shown to the first few viewers and beyond, the first thing they will see (and what will make them decide to click or not click) is your headline. To succeed on Reddit your headline should be relatively short, descriptive, and make the user want to click. If it’s an article, use the headline and the most important issue in it. If it’s a website or product, show the reader what they’ll get when they visit it.

While it can be tempting to focus on how many upvotes you need, that is less important than posting to Reddit at the best time and the number of upvotes you get early on. Unless you plan on buying 10,000 upvotes, the name of the game is giving your post an early boost to ensure it gets on the subreddit’s front page and allow it to snowball from there.

In most subreddits, as few as 100 upvotes shortly after posting is enough to get your post onto the subreddit front page, where it will be shown to a much larger audience. Early upvotes also act as social proof that your post is interesting and relevant, encouraging other Redditors to click on your post and comment on it.

This combination of visibility and social proof will help your post’s upvote count snowball to the thousands of upvotes needed to reach most large subreddits’ front pages.

How to get Reddit upvotes from real humans early on

At the same time, ensuring your post reaches the front page is not a matter of creating 100 accounts and mass upvoting it early on.

Reddit can detect where you’re voting from and the history of the accounts voting on a certain post. When they notice strange patterns like multiple votes on the same post from the same location, their vote manipulation filters may be triggered. If Reddit suspects vote manipulation, they can suspend or permanently ban your accounts and even ban your website from Reddit.

Instead of risking being banned from Reddit with bots or your own accounts, you can buy upvotes from real Redditors with established accounts. BoostUpvotes allows you to buy Reddit upvotes from our network of voters distributed across the world starting at just $0.20 per vote.

We’ve worked with over 15,000 customers since 2015, and helped them reach the front page and hundreds of thousands of visitors by giving their posts the boost they need to go viral on Reddit. 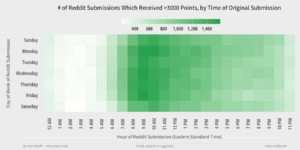 When marketing your business on Reddit and other social media it’s important to optimize your efforts for all factors. As has been shown time and