When marketing your business on Reddit and other social media it’s important to optimize your efforts for all factors. As has been shown time and time again, when you post on Reddit can have a major impact on the number of people that see your post.

Traffic numbers vary but the general trend of decreasing towards the late morning and increasing at night until around 11PM Eastern Time is consistent across Reddit’s largest subreddits. As most of Reddit’s audience is based in the US, this is consistent with most people’s work/school schedule.

The best times to post on Reddit are in the morning (8-11am) and early afternoon (2-3pm EST). Posting at these times allows your post to start gaining traction and upvotes by early afternoon when Reddit traffic starts increasing. These early upvotes will help your post show up on the Hot page where the vast majority of Reddit’s traffic goes. It’s important to optimize for the day of posting as well as the time, as Reddit’s traffic varies significantly by the day and time. The best day to post on Reddit tends to be the weekend, from Saturday morning to Sunday evening.

With most people off from work or school, Reddit receives a significant traffic bump throughout the weekend.

While there are general trends for traffic across Reddit, these trends can vary significantly depending on the subreddit you’re targeting and its audience’s location and usage patterns.

Thankfully, there’s a tool that can help you find the best time to post your content for any subreddit.

LaterForReddit uses Reddit’s API to get data on the top performing posts in any of Reddit’s subreddits. From there, you can see the best days and times to post your content and maximize post reach. If, for example, you wanted to post in /r/InternetIsBeautiful, you would input the subreddit, and LaterForReddit would come up with a list of the best times to post your content.

Once you’ve found the best time to post on that subreddit, LaterForReddit will allow you to schedule your post for that time to maximize your post’s results. 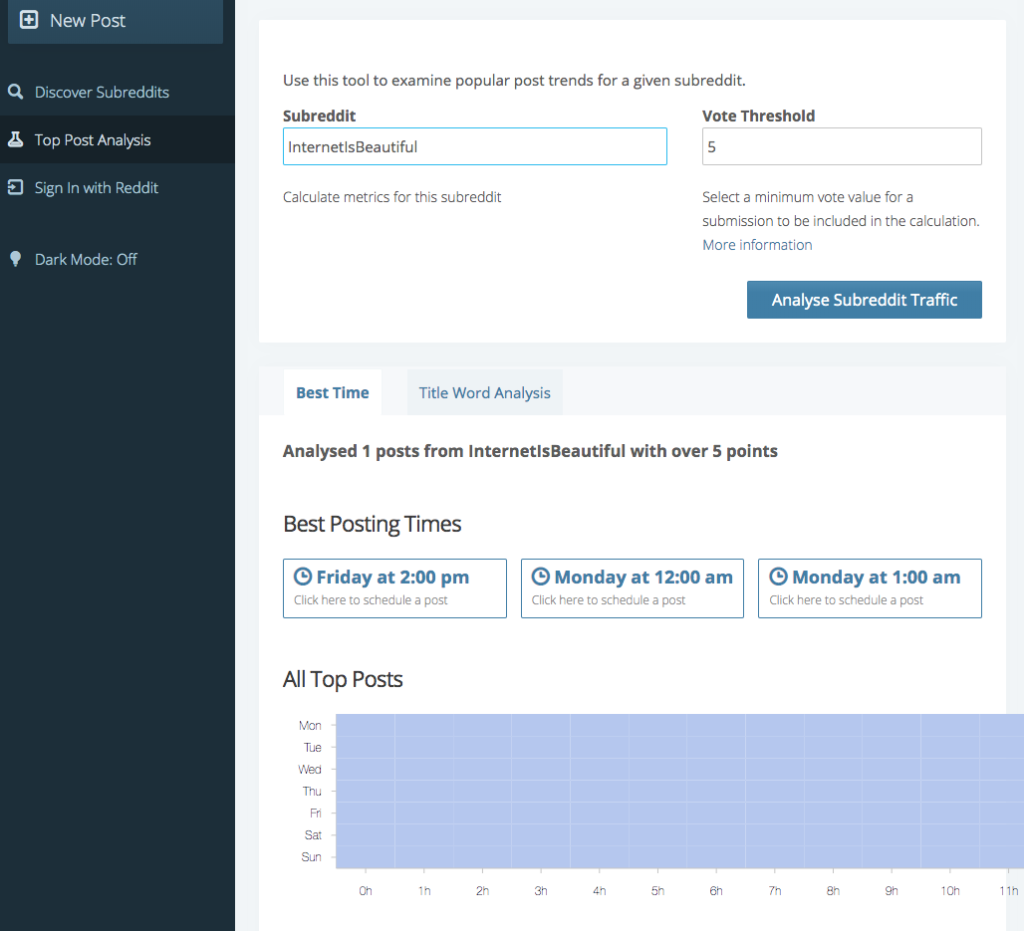 LaterForReddit will show you those patterns too, although this feature tends to work best on the most popular subreddits with significant amounts of post data to analyze. How to Maximize Upvotes Early On

To maximize your upvotes during this critical period after your post, you can buy Reddit upvotes to kickstart your post’s visibility. With even a small number of upvotes early on, you can give your post a boost that will help it move from the barrage of posts on New to the subreddit’s Hot page. Reddit’s use of shadowbans can mean your post may not show up to others even when it shows up on your account. Use the tool By popular request, we have implemented a delivery speed option for all orders. Customers can now choose the speed at which they would like upvotes